After taking the year off in 2010, the Sorento was completely redesigned for 2011 and given a much needed makeover. The outgoing ’09 Sorento looked like a ten-year-old car before it even left the lot, so the new look was a welcome update.

This is the LX V6 model finished in Pacific Blue, and it had 30k miles on the clock.

Kia offers two engines, our V6 monster, and a 2.4L inline-4 pushing a paltry 172 hp. A 6-speed manual was available with the 4-cylinder in 2011, but it was discontinued for 2012, leaving the 6-speed auto as the only option. Front-wheel drive is standard, but AWD is available. To top if off, you can choose from LX, EX, or SX trims, resulting in enough combinations to satisfy everyone. The base 2011 Sorento started around $20k, but fully optioned, it could find its way into the mid-$30s.

This LX was optioned up with the V6 and third row seats. That’s it. Meaning we did not get automatic headlights, foglights, leather, heated or cooled seats, dual-zone climate control, nav, parking sensors, backup camera, sunroof… these required a few more boxes to be checked on the build sheet. Price was likely somewhere shy of $25k. Headlights are halogen projectors; xenons are not available, even on the upscale SX.

Acceleration felt good for something pushing two tons, but just barely. The smaller engine would surely be overtaxed trying to get up to highway speed. The V6 is strongly recommended, especially since the mileage ratings are very similar; the FWD four is rated 21/29, while the AWD V6 drops only to 18/24. We averaged low to mid 20s running through a few tankfuls. The six-speed Sportmatic offered the ability to manually select gears, although it was quick to upshift itself close to redline. Steering feel was nice, although right on the verge of being too light.

The interior was easy to use and still relatively clean, but the light cloth and swaths of black plastic seemed like they would not hold up well to many years of abuse. After 30k miles, this one also had what seemed like an unhealthy amount of rattles going over even the smallest of bumps. Dual 12v outlets up front come in handy, and there is one for rear passengers as well, but the cover would not stay closed on this one. Early signs of what’s to come?

The plastic dash was hiding some rattles, but there were some coming from the rear as well. We never did track them down. No matter since there was a fair bit of road noise attempting to drown them out on the highway. It is also worth noting the front plate seemed easily bent as half of it was flapping in the breeze since the bumper did not have enough surface area to fully back it. Those concerned with looks might do better to remove it altogether.

The radio featured Kia’s typical aux and USB inputs for easy wired playback. It also had Bluetooth connectivity, and the connection was painless with an iPhone 4. Streaming music was nice, but it did not display any song info on the screen.

The on-board computer included two trip meters, average speed, MPGs, and a timer, but it seemed to reset itself randomly. Average MPGs would never go above 25.0, even after miles of highway cruising, sometimes average speed would drop into single digits after only a few minutes of parking lot traffic, and we never did figure out what exactly the timer was timing. A few minutes reading the manual would probably explain it, but the result did not seem worth the effort. There is also a little green ECO light in the tach that illuminates to remind you that you are driving like a granny. Apparently grannies do not go faster than 77 mph because the light would not come on above that speed.

The plastic door pull was given a shiny chrome finish, but unfortunately the chrome was already beginning to peel on this one, something you felt every time you opened the door. The door lock button was dark and could be difficult to operate at night. Auto up/down was on the driver’s window only. Locking the power windows meant nobody could operate passenger windows, not even the driver. Rear passengers did get good climate control, check out the gallery below.

Folding both rows of seats resulted in decent cargo space, although the second row did not want to go completely flat. Notice there is no panoramic sunroof. That is an upgrade available only on higher up models.

Standard tires on the LX are 235/65R17, while the EX and SX get bumped to 235/60R18. This was not really intended as an off-roader, especially in FWD guise, so sticking to gentle terrain is probably for the best. Hill descent control is standard, however, just in case you ever find yourself somewhere you do not belong. The surface below was muddier than it appears, and the front wheels were struggling to get traction.

Kia has come a long way recently, and they did not disappoint with the Sorento. It is not as fast or luxurious as some others out there, but it is not trying to be. For the price, it is tough to beat. Add in Kia’s 10-year/100,000-mile warranty, and this is a real contender. 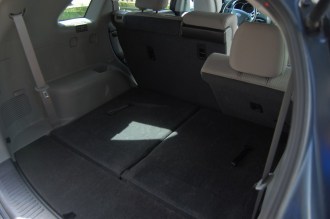 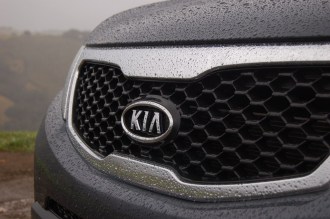 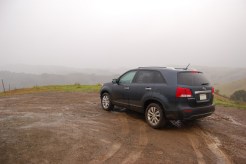 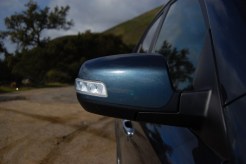 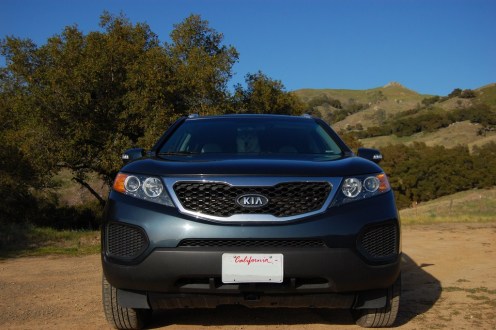