The Cruze is a relative newcomer to the US, first sold as a 2011 model to replace the aged Cobalt. It offers an attractive package inside and out, and it has quickly become one of the best-selling cars on the road.

The biggest downfall experienced with this car was the huge amount of turbo lag; it was absolutely gutless at lower RPMs. You had to keep it in the upper half of the rev range just to keep up with the flow of traffic. Pulling away from a stop felt like something was stuck under the pedal because it just would not accelerate. This likely had something to do with the fact that temperatures nearing triple digits and we were driving high up in the mountains of Colorado.

Another weak point that became apparent in the heat was an unimpressive air conditioning system. It took the edge off the blistering heat, but it did not really cool down.

Other pet peeves include the seemingly oversize headrests that appeared to limit visibility a tad too much, and the positioning of the seat recline lever. That big lever on the side actually adjusts seat height, while the little lever that is hidden and impossible to find when you are actually in the seat is the one that reclines.

As long as the turbo wakes up when temps drop, the Cruze should be a very appealing option for those shopping compact cars. The interior is among the nicest of the segment – the seats were comfy, materials did not feel cheap at all, and the steering wheel felt like it came from something with a much higher price tag, although it lacked audio controls. Overall cabin noise was surprisingly muted. One amazing discovery was the window controls from the driver’s seat were one-touch down for all windows. That seems like a small thing, but so many cars do not include what must be a 3 cent window switch so you have to hold it while the window goes down. Oy vey!

Controls were simple and easy to use, but this one was not equipped with navigation, so it was left with Chevy’s familiar blue monochrome display. The exterior is attractive without being too flash, and it is leaps and bounds ahead of the old Cobalt. It is even pretty enough to be featured on Hawaii Five-0 as Kono’s vehicle of choice.

The Cruze is far from a performance car, but it still offers an impressive package with good build quality considering it is in the compact segment. It even earned the Top Safety Pick award from IIHS, so drivers can feel a little safer behind the wheel. It represents practical choice with a premium feel that appears much nicer than the price tag would indicate. 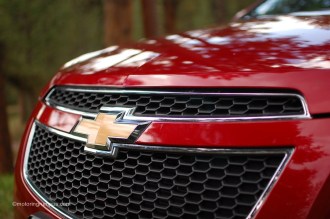