While new to the US market for 2013, the Spark has been selling around the world for a few years already. For its US debut, it gets some reworked design elements to give it a more aggressive look. The base LS manual Spark starts under $12k, while the 2LT automatic approaches $17k. This is the middle 1LT trim with a $14,710 MSRP.

There is no denying the Spark is a small, cheap car, but it turned out to be much better than the numbers suggest. Small city cars usually are not much to look at, but Chevy did some nice things to give it some visual appeal. Aggressive body lines and a spoiler give it some flair, and the 2LT model even gets some sculpted rocker panels to finish it off. You might not guess at first, but it does have four doors. The rear handles hidden in the C-pillar give it more of a hot hatch look, despite being far from it.  It is only five inches longer than a Fiat 500, but it does a good job making the space much more accessible.

Most people will be able to fit in the rear seats, but you would not want to spend a lot of time back there. They also fold down for more cargo room, but the cheap construction became evident as you flipped the seat bottom out of the way. It felt poorly made and like there should be a better way to do it. 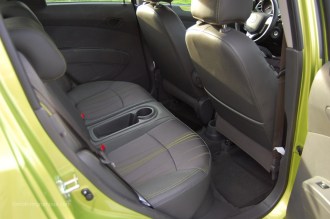 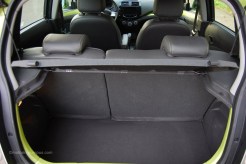 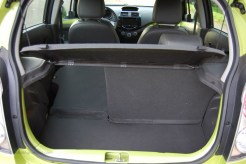 The Spark comes in some pretty wild colors, and Chevy included some painted interior accents to bring some of that attitude inside. The dash did have a lot of hard plastic, but it did not seem overly cheap. The 7-inch touchscreen was a nice surprise, and there is actually a lot of tech here not usually seen on minicars thanks to the Chevy MyLink system. It was intended to be paired with smartphones, which brings in streaming audio and navigation. The steering wheel had audio controls, but there were no physical buttons on the dash for the radio. The touchscreen seemed a little slow at times, especially when trying to change the volume using only the touch controls. And forget about playing CDs here, it is not even an option.

You are reminded that this is a small car once you sit down as the seats are narrow, but not cramped (although “passengers of size” may feel otherwise). Visibility was good thanks to deep windows and a nice sweeping beltline that made it easy to take advantage of its small size without feeling too exposed. Even the small side windows forward of the mirrors were useful, unlike some other small cars that seem to include them only for stylistic purposes.

The steering wheel had plenty of buttons –  cruise control, Bluetooth, radio – but they were not illuminated at night, making them almost impossible to use. Similarly with the door controls, only the power lock button lit up, so you better learn where all the buttons are before the sun goes down.

The instruments are supposedly inspired by motorcycles, but that seemed like more of a marketing thing than something people would care about. The speedo was clear enough, but the digital layout was small and looked a tad cluttered. It did have useful information, though, so they should give it a little more real estate to ease readability.

The 4-speed automatic was nothing special, and the 5-speed manual is actually the preferred choice. It bumps mileage up to 32/38, instead of the 28/37 estimated mpg on this automatic.

Buried somewhere down there is a 1.25L ECOTEC inline 4, and it did not dissapoint. 0-60 was somewhere north of 10 seconds, and the engine seemed to drone on a bit as you had to keep the RPMs up to keep up with traffic. But the ride was decent, and it never felt like it was getting blown off the road. Only after getting on the highways did you start to notice the ride quality deteriorate and road noise start to take over. But it was great in the city, those 84 horses were enough to get you going, and parking was a breeze.

Overall the Spark was a pleasant surprise. Judging by the numbers you do not expect much, but it turns out it was not a complete crap car, actually far from it. It is affordable basic transportation with some nice features and a relatively comfortable ride. What more can you ask from one of the cheapest new cars available? 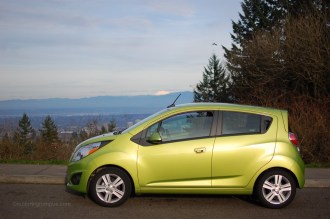 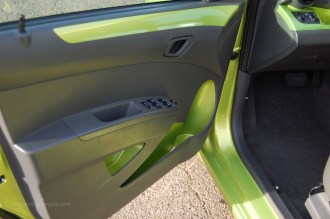 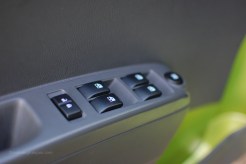 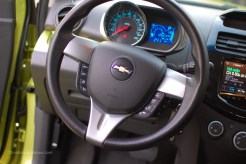 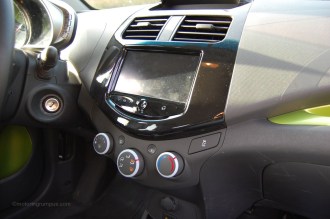