The headlights and tail lights are exclusive to the Limited, and along with the silver tailgate, help distinguish it from lower SE and SEL trims. The HID lights lit up the road nicely, and the fog lights were mostly unnecessary. We can only hope the halogen headlights on lower trims offered adequate light output.

The Flex has a unique look, something of a modern mix of station wagon, minivan, and crossover, and it is certainly not for everyone. Styling is even more bold for 2013 with the new front end treatment, and it definitely stands out in the parking lot. There is no denying its usability, however, with three rows of seats and room left over, it makes a great people hauler. It drives nicely, too, considering its size. The bulk seems to disappear when behind the wheel, and it handles curves much better than other SUVs. Steering and brake feel seem to be just right.

285 hp from this V6 felt adequate, but the twin-turbo EcoBoost’s 365 hp can get to 60 in under 6 seconds. Impressive considering the size and weight, and no major drop in fuel economy. The EcoBoost comes only with AWD and returns 16/23 mpg. The standard FWD V6 returns 18/25, and the AWD 17/23.

There was a small gap in the floor between the second and third row when folding the seats down, but overall space was impressive. This one could seat seven passengers, but second row bucket seats are an option, as well as a refrigerated console between them. Legroom was huge in the second row, and the third row was actually usable. The PowerFold option flattens the third row for you, otherwise it is a bit confusing at first to do it manually because it involves a few different release handles and you have to flip and tumble to get them out of the way.

Our second row bench seats had a 60/40 split and autofold feature on passenger side only. The Limited also gets a center pull down armrest with cupholders, as well as a 110v outlet that comes in handy.

Unfortunately, the SYNC MyFord Touch system still needs work. It just seems like Ford is trying to do too much with it, and it is not easy enough to use. You get the dual screens in the cluster, but they are controlled by the chunky buttons on the already crowded steering wheel. Things like radio, climate, phone, and navigation can be controlled by your right thumb. The point is to keep your eyes forward, but there is so much functionality that it takes too much time drill down through all the options. It definitely feels faster to use dedicated buttons in the traditional center location, meaning your eyes are off the road less.

There is also an 8-inch touch screen in the dash that serves as the interface, but that also looks too cluttered. Perhaps using voice commands limits physical interaction with it, but everything should still be easy to use. The touch screen was a fingerprint magnet, and it was difficult to see in direct sunlight. All climate and sound controls were touch-sensitive, and it made us miss physical switches and buttons because it was slightly more difficult to press the right area at times.

Another complaint is the giant key fob and huge panic button. The alarm was set off accidentally more than once by hitting the wrong button.

Other than the cumbersome tech, the Flex offers an impressive package. It felt equally at home cruising the highway or city streets. The base models starts at $30,885, but a fully loaded one can top $50k, so it should appeal to a wide range of budgets. 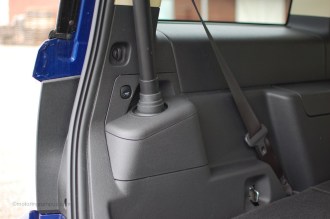 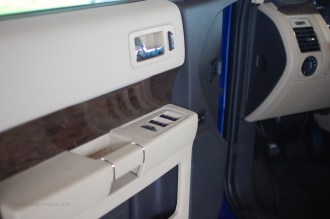 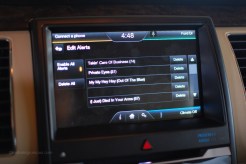 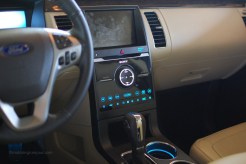 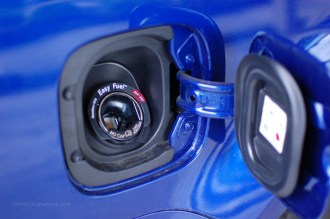 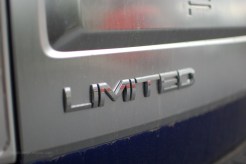 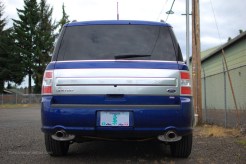