The Mustang was treated to a minor update for 2013 and new lights are the easiest way to distinguish it from previous years. HID headlights are now standard, and they are accented with dual LED DRL strips. The latest rumors suggest an all new Mustang will be released in 2014 as a 2015 model with significant design changes.

New LED sequential turn signals in the rear are a nice update to the current design, and our black car looked better than some of the other available colors. The parts between the tail lights and around the license plates are always black, and it seems to flow better when it matches the rest of the car. Dual exhausts are standard, even on this V6, the smallest engine available.

$26,200 gets you into the V6 Premium trim. The sticker on this car also included an additional $1,195 for the automatic transmission and $295 for the Exterior Appearance Package 201A. That package usually includes the spoiler and side tape stripe, but the stripe has been deleted. Add the $795 destination charge and the total for this one comes to $28,485.

The updated exterior looks great and always seemed to get people’s attention. People love Mustangs, and the base price of only $22,200 makes them seem like a bargain for people looking for power and style. The base V6 is unchanged and still produces 305 hp, plenty of power to get anyone into trouble. There were no paddle shifters on this automatic, unfortunately, instead manual shifts were achieved through your thumb pressing a small rocker-switch on the gear shifter. It did not produce the same satisfaction as paddles would, but it got the job done.

As you spend more time inside, it becomes evident this is where Ford decided to cheap out. The strong exterior is let down by the weak interior, and it already looks ten years old. All the hard plastic on the center console did not match the athletic body design. Contributing to the bargain-basement feeling was the lack of heated seats, dual-zone climate control, and navigation. The Shaker radio was a disappointment and surprising to think it is an upgrade over the base system.

The leather seats looked great, but also disappointed when you sat down. They felt firm and a little too racecar-ish for standard equipment. Aggressive side bolstering will make even normal-sized people feel a little … wide. The firm suspension only compounded the issues with the seats, and the ride felt more harsh than it should have. While there are suspension upgrades available, that should not mean base cars are completely ignored. Optional Recaro buckets for $1,595 may be a worthwhile upgrade.

After you get over the disappointment of the seats, you notice some nice updates to the instrument cluster. Custom colors are a nice touch, but the Track Apps are where the fun is. Built-in acceleration and brake meters turn every stretch of pavement into a track. Depending on how you adjust your seat, however, the fancy adjustable gauge colors can reflect in the windshield to produce some distracting glare. Looking through the rearview mirror had some distortion as cars appeared too tall and thin through some parts.

Rear seats should be reserved for children, or those with no legs. Those who do manage to squeeze back there are forced to deal with limited headroom as the shape of the coupe takes priority over rear passenger comfort. Thankfully, this car was not intended to haul people so you cannot really count that against it.

The Mustang’s shortcomings can be forgiven when you realize that its low entry price makes it attainable to the masses. Drivers can still have plenty of fun with the entry-level Mustang, or they can can go crazy with the GT500. Either one will get the job done, be it at the track or the daily slog to the office. Now let’s just hope the upcoming radical new Mustang does something about that interior. 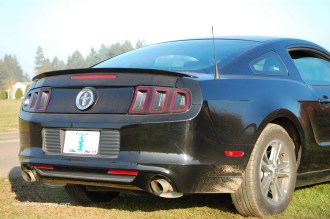 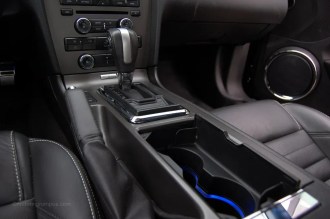