The Rio was all new for 2012, and 2013 brought only minor updates. The fresh new design is a huge improvement over the old Rio, and it joins the rest of the impressive modern Kia lineup.

It looks sharp for an economy car, and the top of the line SX model adds 17-inch wheels with a sport-tuned suspension. This base LX car only has 15-inch steel wheels with plastic covers. Being the cheap model means this one is also missing other dressy bits such as power-folding mirrors with turn signals, automatic lights, foglights, and LED accent lights.

The cabin has a premium feel and looks like it belongs to a more expensive make. Unfortunately it seems that most of the work went into the appearance of this car as there are a few disappointments once you start driving it. Kia cheaped out by omitting a center console armrest on the LX model, and this one does not even have cruise control (but they did provide cup holders!). Satellite radio is standard, but with only four speakers, sound was unimpressive. Too bad because there was a lot of road noise that needed to be covered up. Between the poor audio, the impressive amount of road noise, and the engine note creeping into the cabin, your ears never got a break.

The driver seat height is adjustable and provided a good view of the road ahead, making the Rio feel much larger than it actually is. The passenger seat was very low and was not adjustable, and the height difference seemed a little more noticeable for some reason.

Simple gauges provided basic info, although 140 seems a bit optimistic. Visibility was surprisingly limited to the rear. The attractive exterior lines resulted in a small rear window and a chunky C-pillar creating some healthy blind spots.

Unfortunately there was a bit of controversy recently over some of Kia’s and Hyundai’s optimistic fuel economy ratings. Apparently there were some miscalculations and the numbers had to be adjusted down by as much as 4 mpg. They are reimbursing owners for the error, but it is still a PR disaster that turned a lot of people off the brand. More info here kiampginfo.com

The price tag on this one is around $16k, and the premium SX can top $20k. But it starts under $14k, which means most of its shortcomings can be forgiven. While Kia has done wonders on improving appearances, the next step is to tackle everything else. 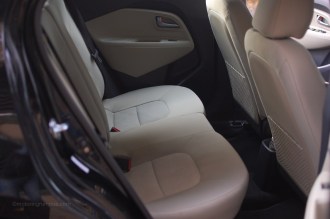 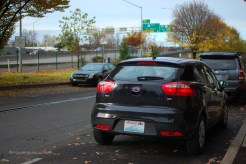 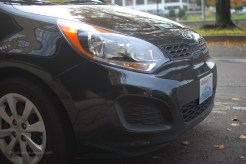