The 2014 Camaro immediately stands out from previous years due to new styling both front and rear. While the jury is still out on the new rear end treatment, the front fascia is sleeker, more aggressive, and a definite improvement. This is the biggest update to the 5th gen model since its 2010 launch, but the internals remain unchanged, and the side profile is still unmistakable Camaro.

The rear is where things start to get controversial. Some feel that the new tail lights are a little too conservative, although they do look better in person. We think most people will learn to love them eventually. Dual exhausts come standard.

MSRP for the base 1LS model is $24,550. It goes up from there with a not at all confusing naming scheme: 2LS, 1LT, 2LT, 1SS, 2SS, ZL1, Z/28. This is the 2SS model, finished in Silver Ice Metallic, which starts at $36,855 plus $995 destination. While a 6-speed manual transmission is standard, this car was fitted with the $1,185 automatic option. Choosing the auto also gets Chevy’s Active Fuel Management technology, a gas-saving system which utilizes cylinder deactivation. Unfortunately, AFM also means power ratings are slightly reduced as the manual achieves 426 hp from the same engine.

Our car did not have the $3,500 1LE Performance Package, which includes go fast bits like bigger wheels, sport suspension, and a 3.91 final-drive. Or the $1,350 RS Package, the appearance option which sharpens things up with crisp HID headlights and LED tail lights. Also missing were the Recaro seats for $1,995. The heated leather sport buckets standard with the 2SS were reasonably comfy and fine for everyday use, although those looking to spend some time at the track may want to consider the Recaros.

The interior should be familiar to previous 5th gen pilots. A splash of color has been added to the head-up display and driver information center in the instrument cluster on 2LT, 2SS, and ZL1 cars, otherwise the layout is unchanged. The sun visors remain useless when folded down, and even more useless when put to the side, if that is even possible. Visibility overall is limited, and the rear vision camera is a must.

A staggered set of Pirellis are standard on the 2SS, 245/45ZR20 up front and 275/40ZR20 out back, while 21-inch wheels are available. Optional performance exhaust is not available on the SS with the automatic transmission, but the standard setup was still enough to wake a quiet neighborhood. The hood vent is actually an air extractor designed to help cool the engine and improve air flow.

The 6.2L V8 is the life of the party here, and it offers plenty of fun. Despite a nearly 2-ton curb weight, it hustles to 60 in under 5 seconds; the ZL1 and its supercharged LSA betters that time by almost a complete second.

The Camaro seems to be universally loved, as no matter where we ended up, more people seemed to comment on it than any of our other recent cars. It seems only a small number of people really take issue with the new looks and nobody had bad things to say about it in person. The Camaro faithful are disappointed Chevy took away the two-piece tail lights, but they will get over it. And for those who like the new rear end but prefer the old front, the 2014 ZL1 has you covered. It is keeping the previous front fascia as the new design would not work with the supercharger.

With the the base V6 starting in the mid-$20s and the upcoming Z/28 rumored to start just north of $60k, Chevy has created a Camaro for just about anyone. For us, the Camaro continues to impress with its usability and combination of power and style. At the moment, the Camaro is the top dog of the American muscle car heap, but with new Mustang right around the corner and SRT Challenger/Barracuda rumors flying, we will soon see if it can keep its place. 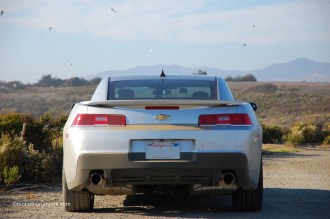 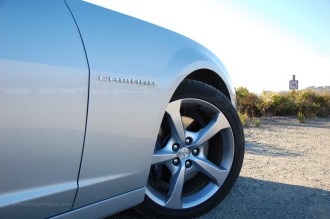 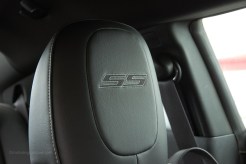 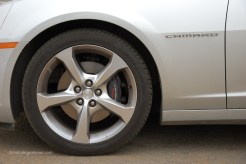 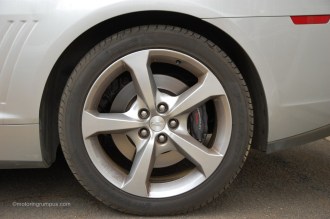