The Kia Soul has interesting styling when it’s by itself, but put it next to the Nissan Cube, and it looks almost mainstream. The box-on-wheels Cube definitely has a unique look with its asymmetrical design, and most people have a strong and immediate opinion of it. The Cube is less than two inches taller than the Soul, but its boxy shape makes it feel much taller inside. The Cube’s side-hinged backdoor is great for urban environments as it opens away from the curb, while the Kia has a more traditional hatch opening.

The Cube continues its unique styling with a water drop ripple theme throughout the interior, and everything from the headliner to the floormats got a similar treatment. The Kia has a much more conventional interior, and the fit and finish seems to be just a step above the Nissan. Perhaps Nissan took its styling a little too far, but it did have a few redeeming qualities. Headroom seemed to go on forever, the sliding and reclining backseat offered good versatility, and the cupholder right up near the steering wheel was a nice convenience. But the overall package just was not pleasing to look at, and the Kia offered a much more attractive design. Both of these budget cars were not exactly well-equipped, so they lacked some luxuries. Heated seats and a sunroof were missing on both of these, and actually not offered by Nissan at all. Some owners have added added them, but cutting a hole in your roof may not be for everyone. The Kia requires a pricey option to get a sunroof, but at least it is available.

The Cube squeaked out a few more MPGs, but the Soul won both horsepower and torque ratings, although they were relatively close. The Soul also provided a little more fun behind the wheel, while the Cube opted for more of a cush driving experience. The boxy design also did something to the angle of the windows as there were plenty of distracting reflections that seem to be a recurring problem. The Cube starts under $15k, but it will be closer to $20k to make it comfortable; the Soul starts under $14k, but it can easily pass $20k.

The Winner: Kia Soul Namely thanks to a better driving experience, but also its better interior, bigger list of options, less polarizing design, and lack of dangerous reflections in the windows. 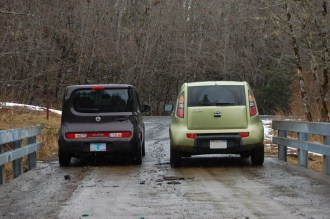 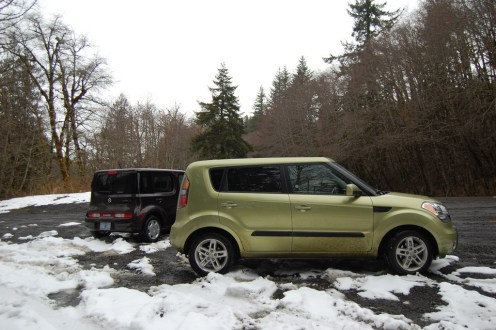