The 2012 Dodge Journey SXT starts at $22,995. Selecting AWD upgrades the price to $26,395. The only option on this car is the $995 Flexible Seating Group package, and add in the $995 destination charge to bring the total price to $28,385. The seating package gives the Journey separate rear climate controls and third row seating. Nothing changes for 2013, save for slight price bumps. For example, the cost of the the Flexible Seating Group option has increased to $1,150. The bare bones American Value Package comes in right around $20k, while the AWD R/T model is over $30k.

The Journey was updated back in 2011, but it still looks a lot like a minivan. When you get behind the wheel, it seems like you are driving something much bigger. The way it soaked up bumps made it feel more like a large car, but its two-ton-plus curb weight became evident almost immediately. While it is a good highway cruiser, it is not as nimble as some other crossovers.

Chrysler’s Pentastar V6 rarely disappoints, and it turned in a solid performance here. Power delivery was smooth and it never felt like it was working too hard. The estimated 16 city MPG was accurate, but we could only achieve 21.5 over an entire tank on the highway. There is also a 2.4L inline-4 available, but you only gain a couple MPGs while losing over 100 hp, seems like a no-brainer. Additionally, all-wheel drive is only available with the V6.

Leather comes standard starting with the Crew model, but these cloth buckets were acceptable. They felt very American, almost like a big cushy recliner. Heated front seats are available, but they were not present here.

One thing that came in handy was all the interior storage available. There was a deep center console, a couple cubbies in the dash, as well as second row storage bins in the floor. Chrysler’s familiar steering wheel controls were also present, but the buttons were a bit stiff. They required a hard press, but even then, cruise control would not always engage on the first try.

Despite the recent update, interior controls still felt like they were lacking some refinement. The previous years must have been terrible since this generation seems to be getting so much praise. Everything worked just fine, but the controls felt a little clunky. The small touchscreen display did not offer much real estate, and it became a bit awkward and slow having to constantly switch between audio and climate controls. Chrysler offers their larger 8.4-inch touchscreen that includes nav which seems like a better choice; this 4.3-inch screen is trying to do too much.

Dual zone climate control is standard, but the three-zone option provides rear controls and vents on the ceiling. Second row seats recline and fold flat, but with a few different levers involved, it took a couple attempts to pull the correct one. When all the seats were up, rear visibility was limited from all the headrests, but that is tough to avoid in three-row vehicles.

Versatile cargo space is very nice, and the 67.6 cubic feet comes in handy when hauling larger items. There was another compartment in the floor behind the third row to stash even more stuff. The Journey offers plenty of places to lose things if you tend to forget where you put them.

Dodge calls their smart key system Keyless Enter-N-Go, and you never have to take the key out of your pocket. You can lock and unlock doors by touching exterior handles, and it has push-button start. The only issue is that the key is very large and now has nowhere to go, so you are driving around with this bulky key in your pocket or taking up valuable cupholder space. Fortunately there is plenty of storage here (hopefully you do not lose it), but other cars may not be so lucky. 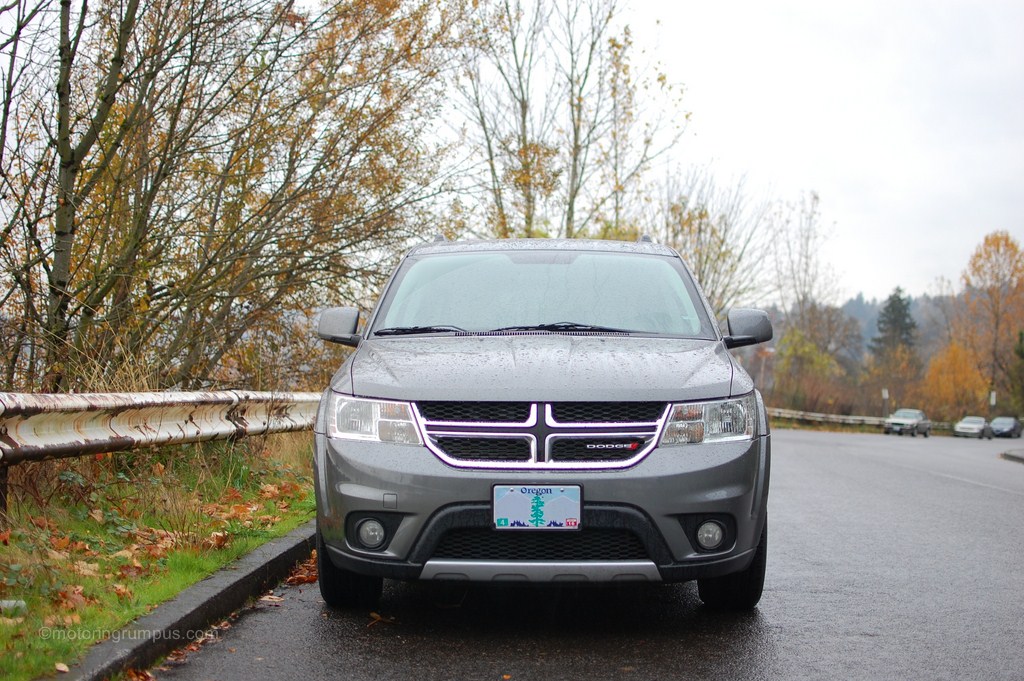 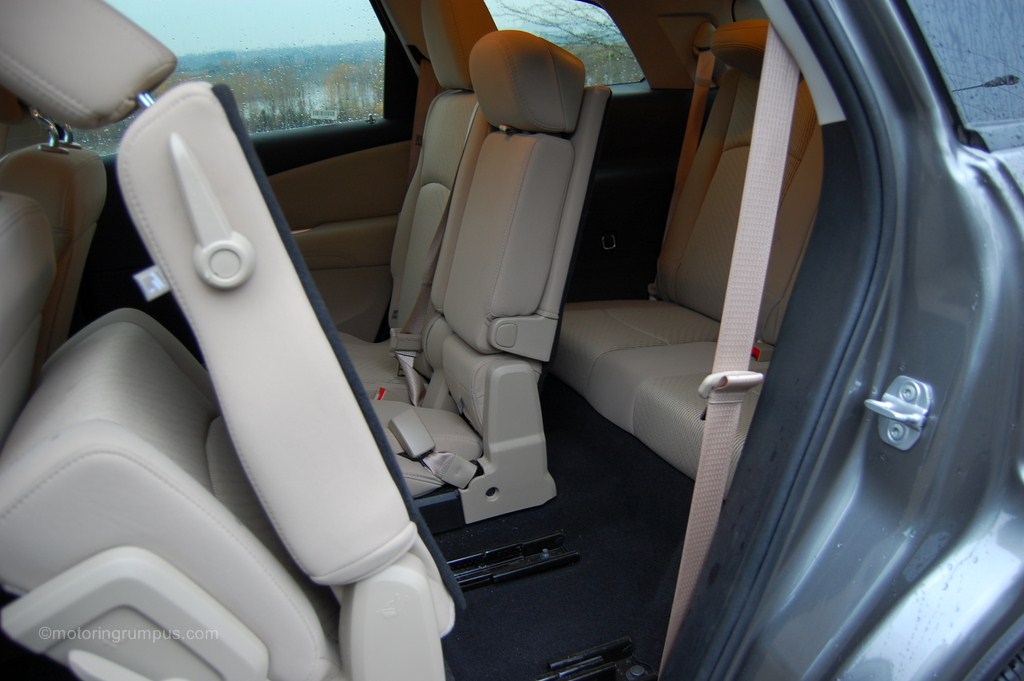 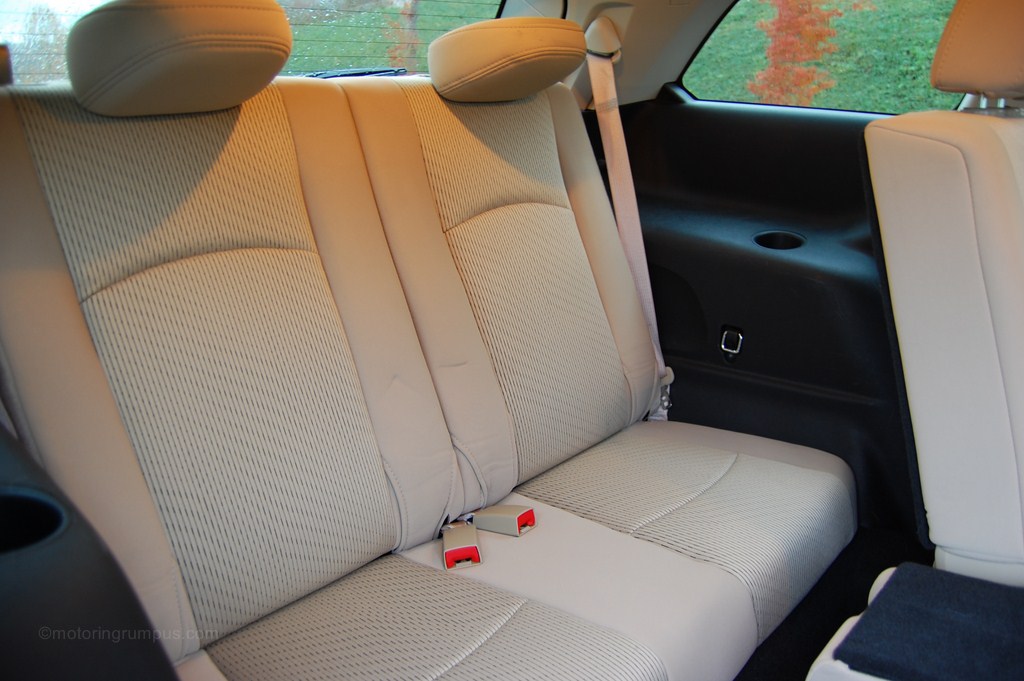 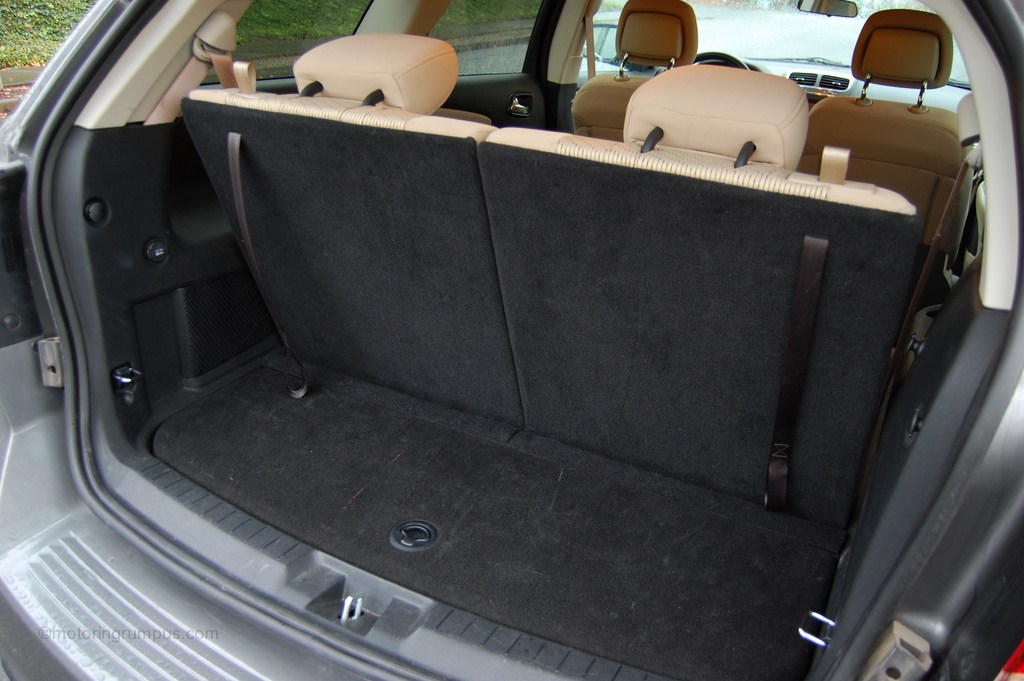