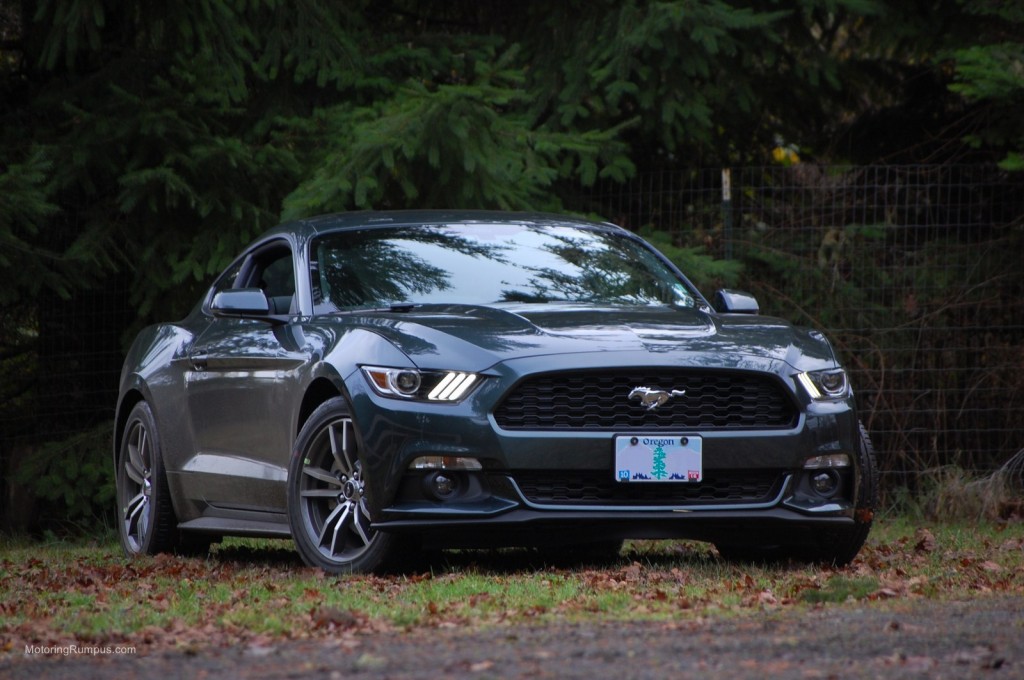 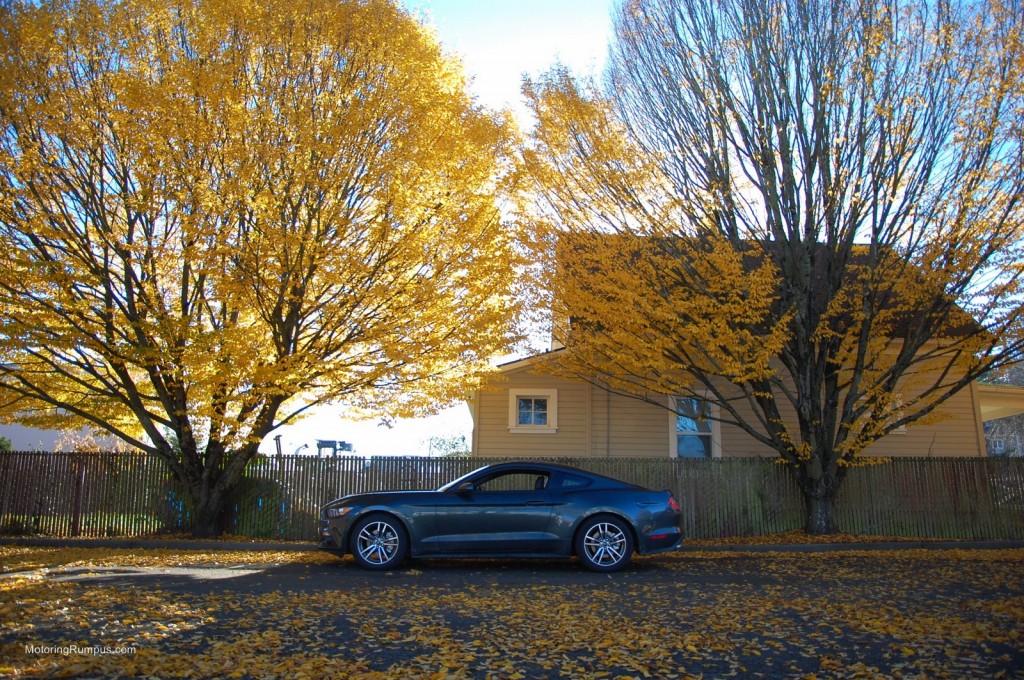 The Mustang gets a fresh new look for 2015. Its new fastback design received a lot of attention while we were on the road, partially due to its striking good looks, but also because many people simply had not seen one in the wild yet. Dark green paint works well here and is actually our preferred color; Ford calls it Guard.

Three engine options are on offer this year, all available in either manual or automatic, both 6-speed. Like previous years, there is a 3.7L V6 and 5.0L V8 available, but there is also a new turbo 4-cylinder option. The 2.3L direct-injection engine features a twin-scroll turbocharger that requires premium fuel to get 310 horsepower, compared to the V6 which manages 300 on regular fuel. 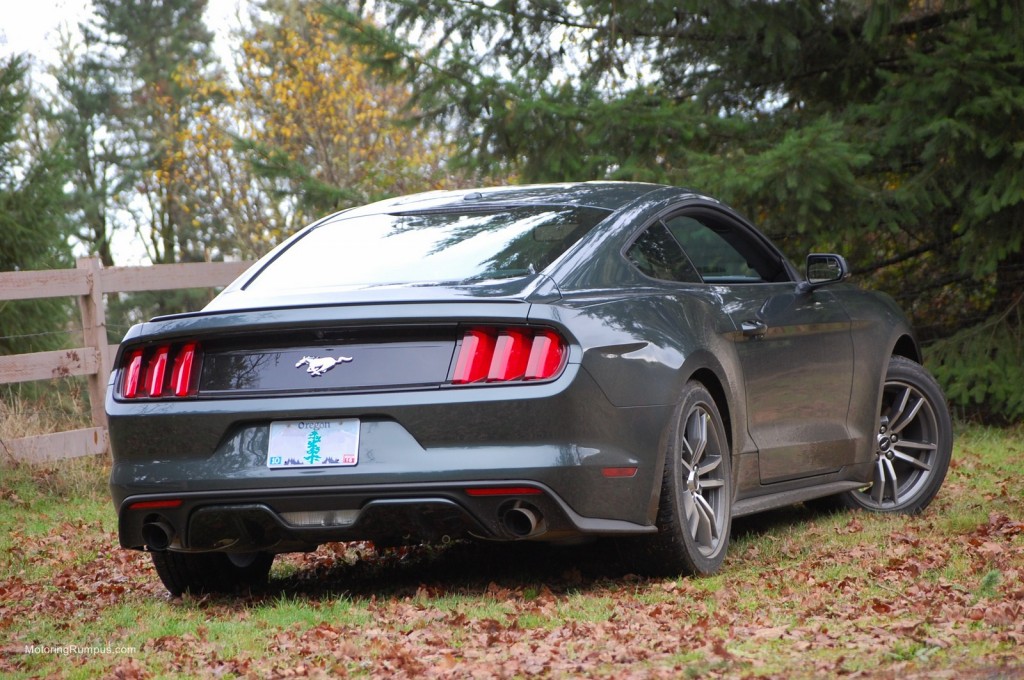 A 4-cylinder Mustang is a gutsy move by Ford, and one way they are countering is by simply not mentioning that fact. While it is not exactly a secret, you have to do some serious digging one their site to find any mention of the cylinder count. Instead, the 2.3L EcoBoost is being touted as all-new and a “marvel of power.” With more power and increased fuel economy, it presents an attractive option over the V6, however it does have its downsides. The exhaust note is less than inspiring, and the controversial Active Noise Control is cause for serious debate. Sound is an integral part of the driving experience, and there is no hiding the fact that this one is down on cylinders. Once you get the revs a bit higher, it does start to come alive, but for your typical driving at reasonable RPMs, the sound is disappointing and easily the car’s biggest letdown.

Although rated at 21/32 mpg, we only managed 20. On the plus side, power was good from the EcoBoost, and it was almost too easy to get the rear to step out, although cold temps and autumn leaves littering the roads certainly did not help. 18-inch all-season Goodyears are standard on EcoBoost models without the Performance Package. 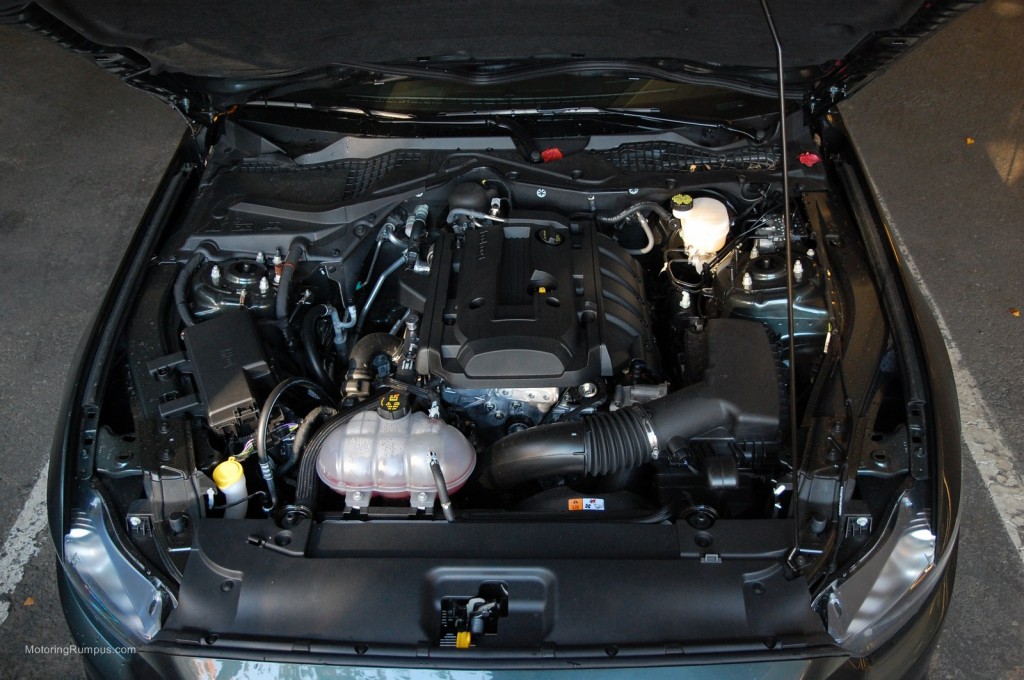 The refreshed interior is a nice improvement over the outgoing model, but it manages to maintain its distinct Mustang look. The MyFord Touch system is constantly being improved, and Ford listened to the many complaints and gave us some real buttons this year. Compared to previous iterations with no physical buttons, there were almost too many here, with the steering wheel alone having 20 buttons (not including the paddles). 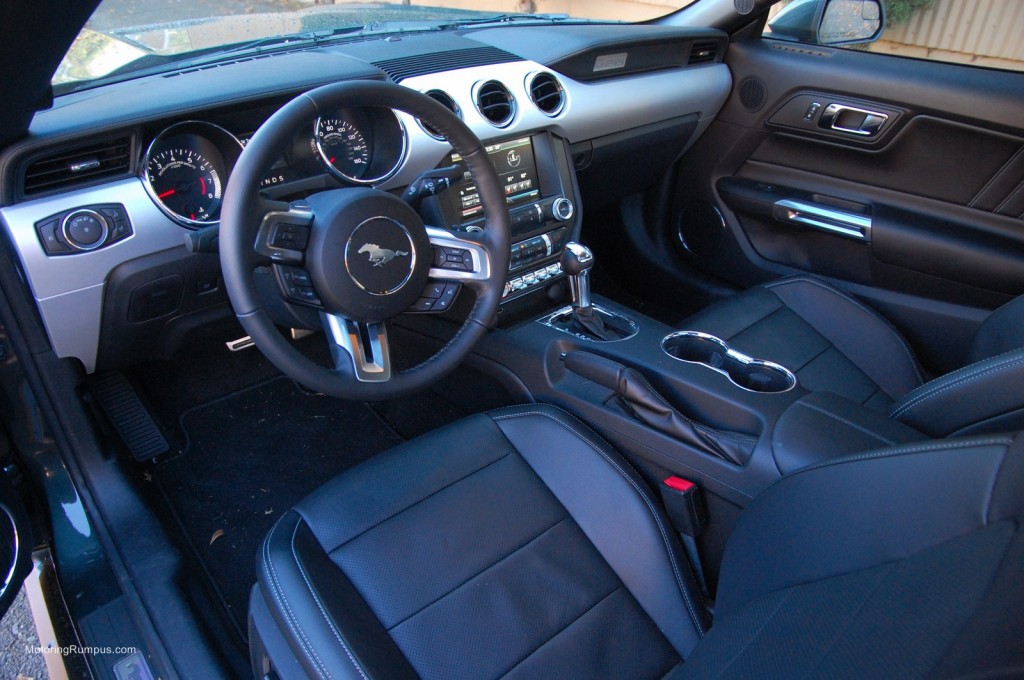 Despite maybe going overboard with the buttons, everything was still easy to use. Toggle switches at the bottom of the center stack provided quick access to a few driver settings. While driving mode defaults to normal at every startup, the steering feel setting will stick. The chrome was a bit difficult to read in daylight. 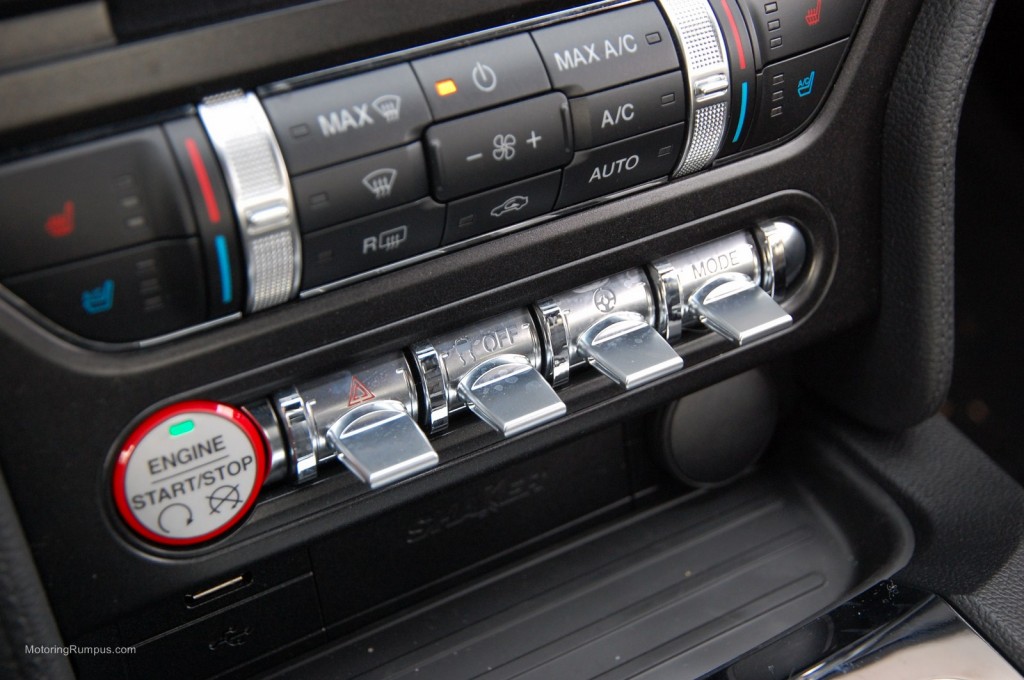 Pony lights are a nice party trick but not all that useful in practice. Standard HID headlights are a nice touch, and the LED accents are very distinctive. Visibility is surprisingly good front and back, but the hood is deceptively long. Tight parking lot maneuvers are a quick reminder that the Mustang is not a compact car, but the standard rear view camera is a big help. 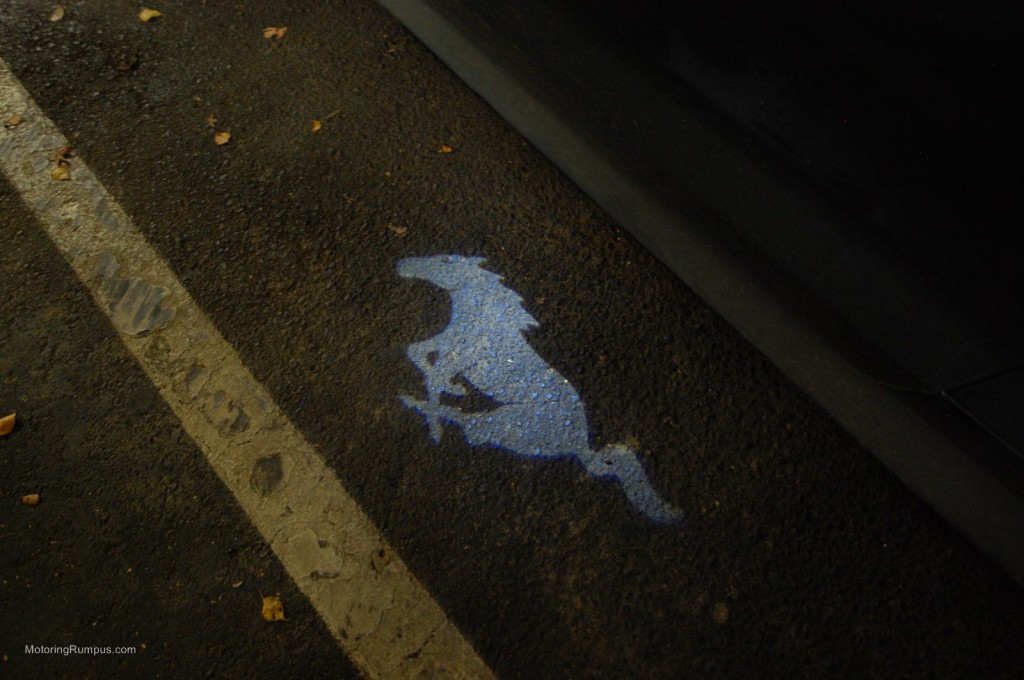 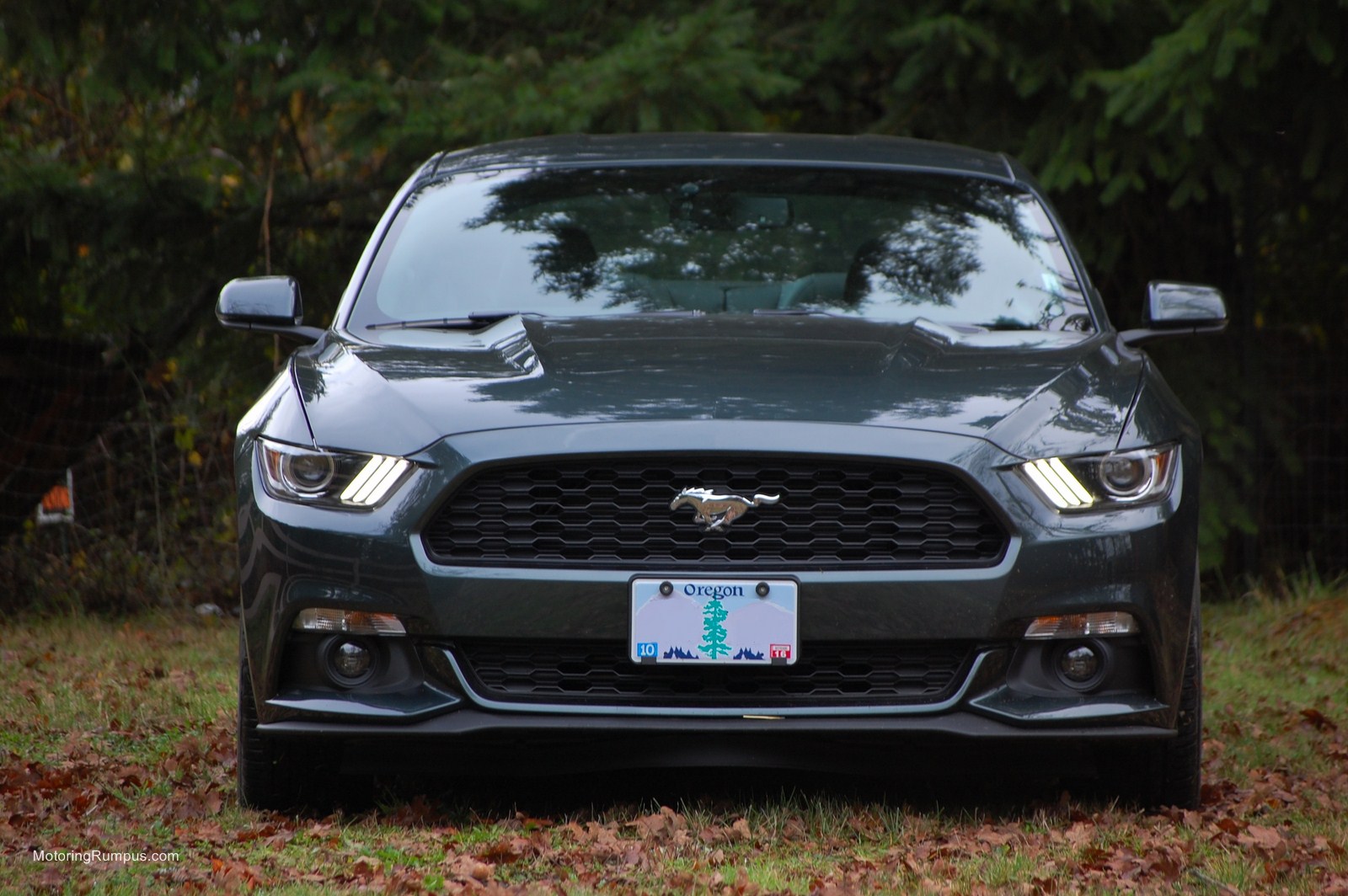 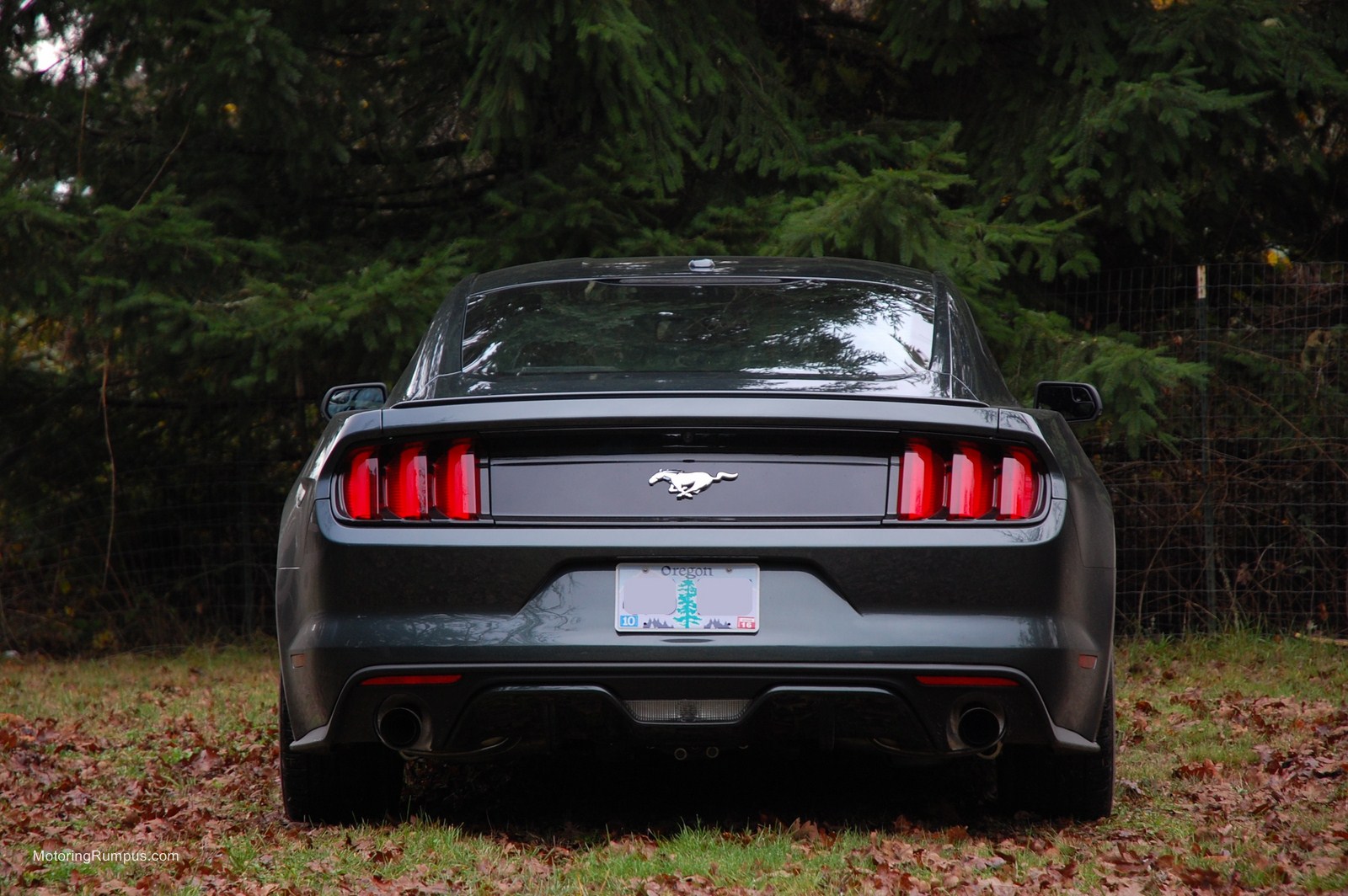 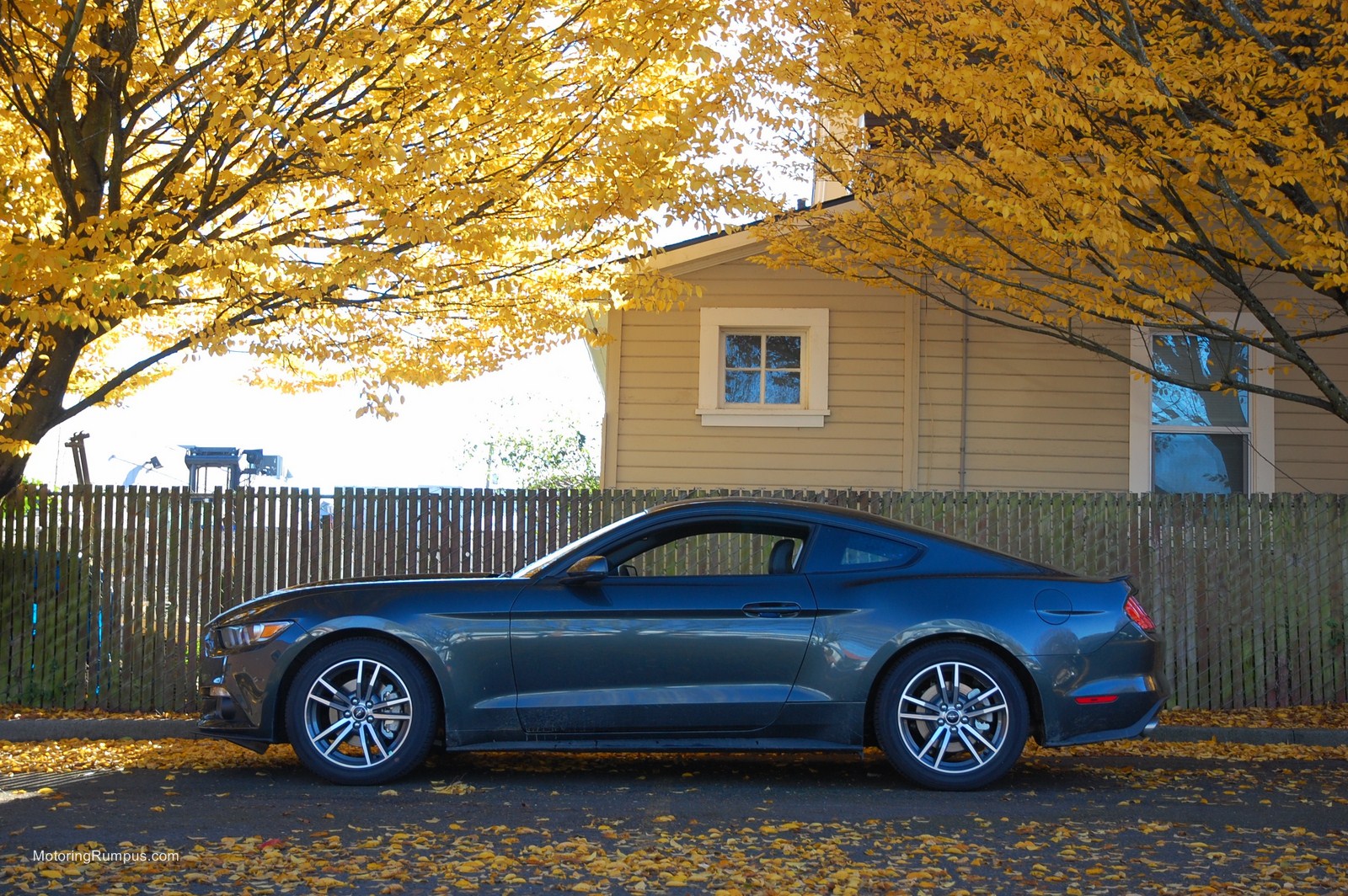 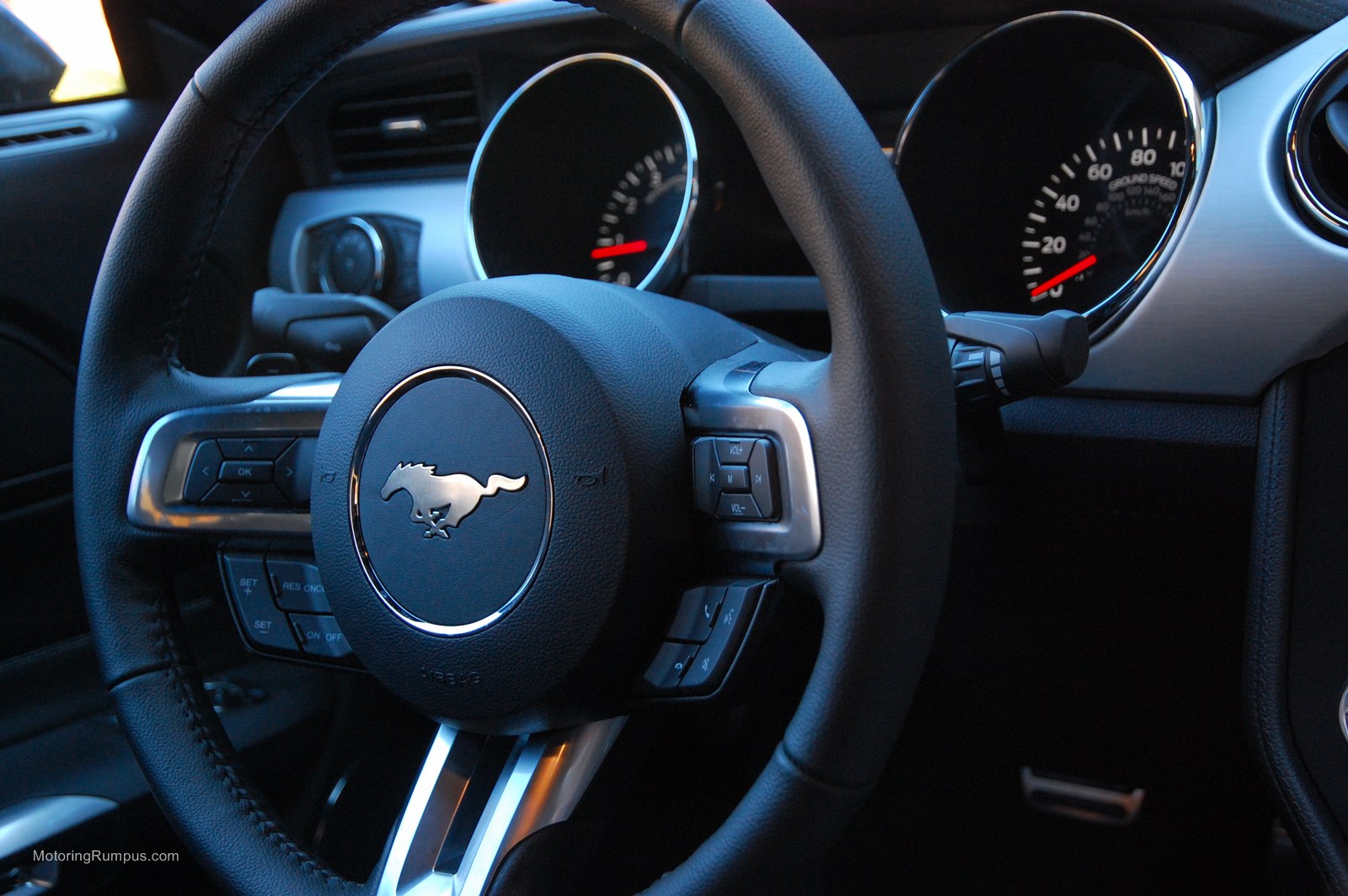 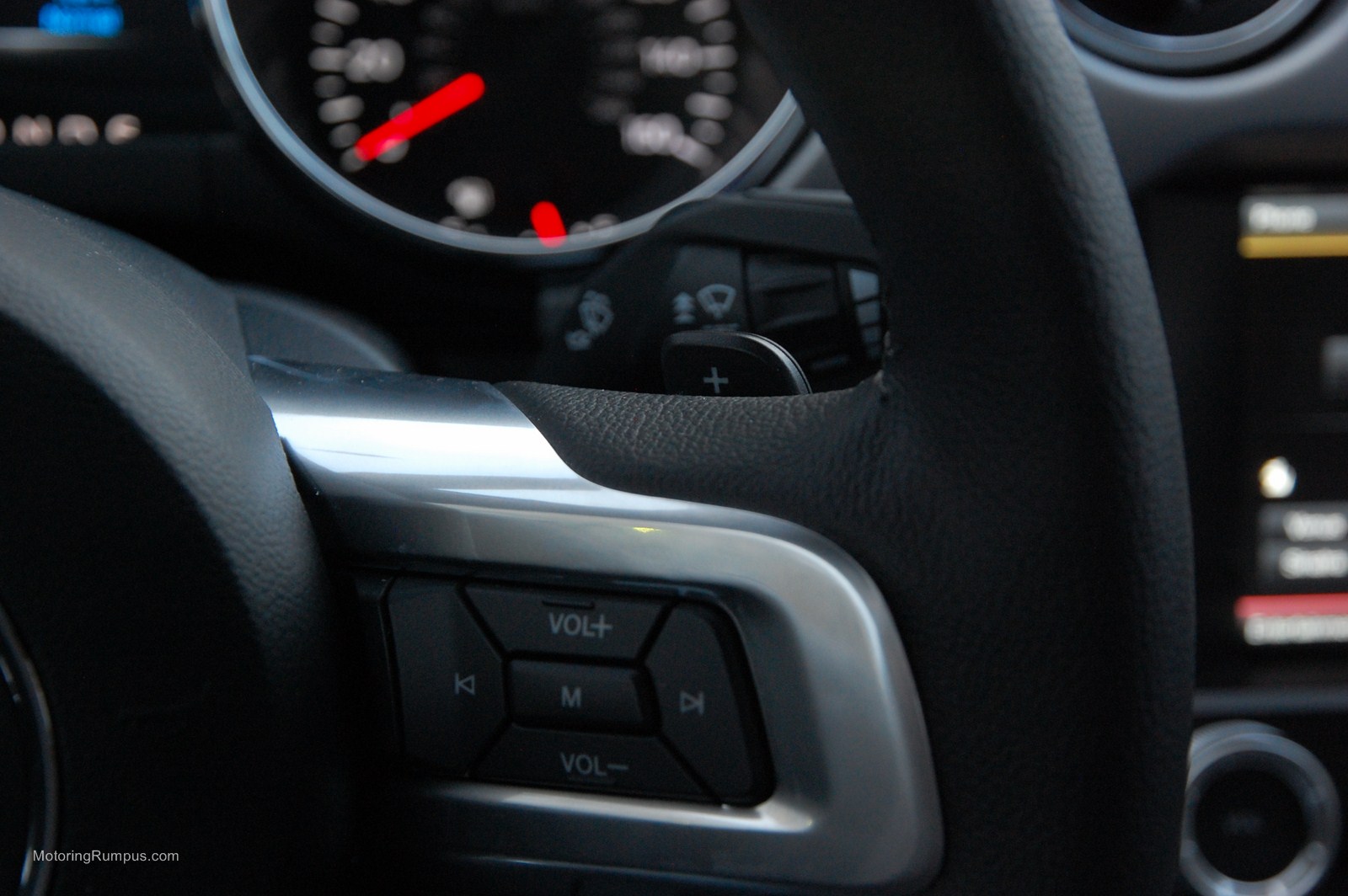 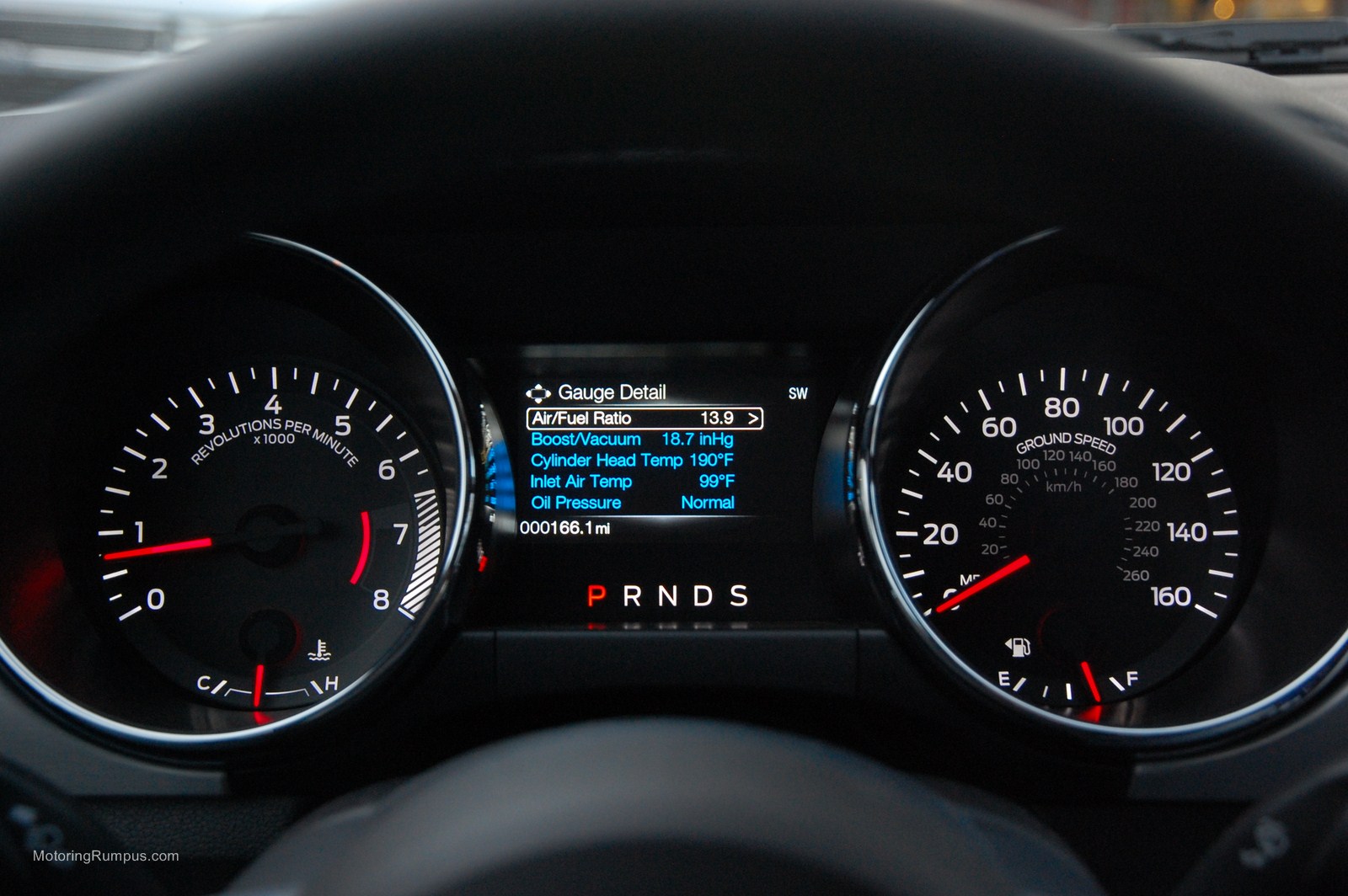 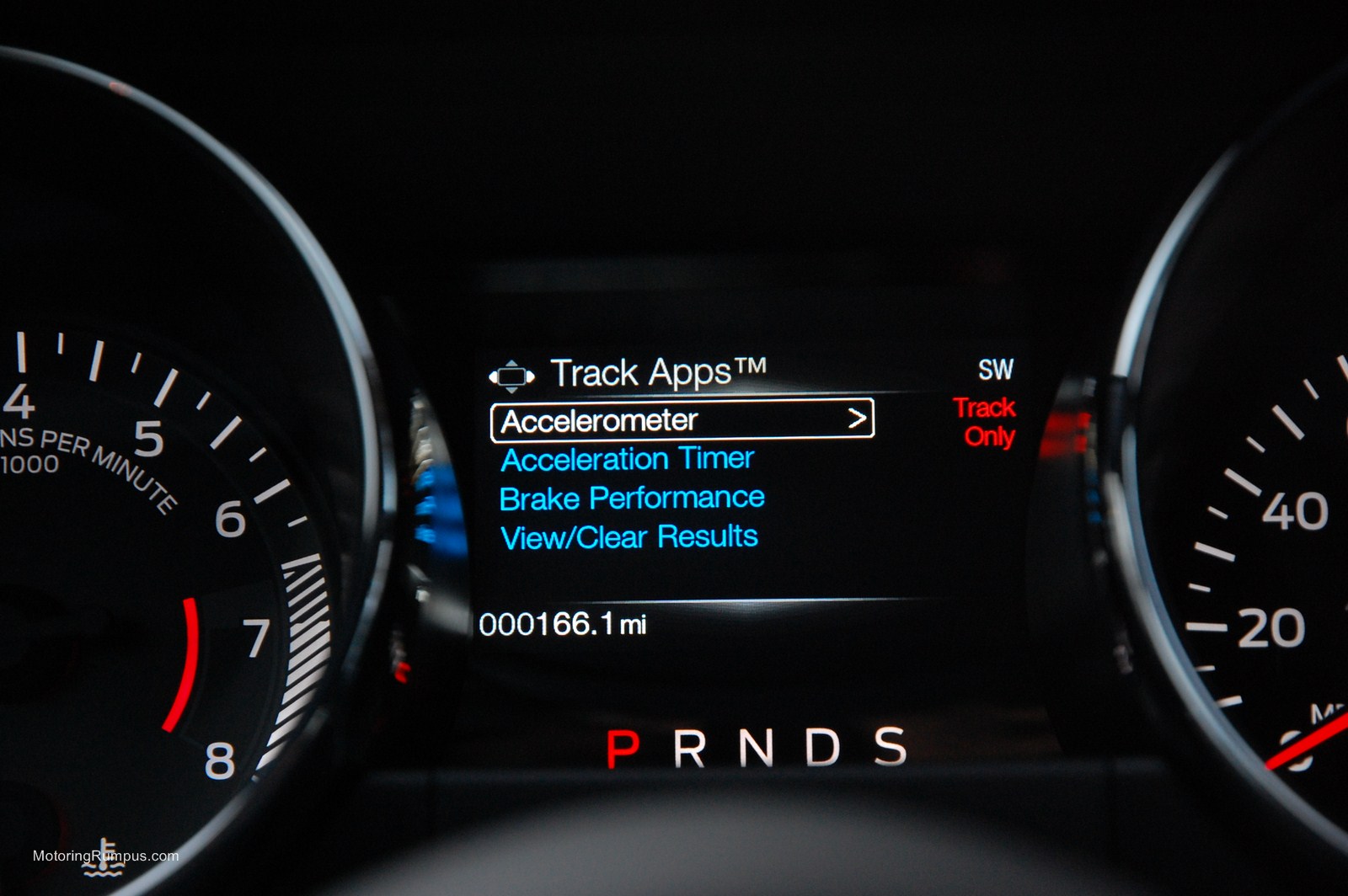